Over the years sun exposure and the wear and tear of everyday living may have resulted in the visible signs of aging such as sun spots, fine lines, and loss of your natural healthy glow. HALO® uses laser technology to eliminate years of damage. The laser triggers your body’s natural healing response revealing the luminous glow you had when you were younger.

Get that Glow with HALO:

Everyone’s skin is different. Everyone’s needs are different. HALO® allows your clinician to customize a treatment to fit your lifestyle. Need to be back at work tomorrow? A light treatment creates smooth, vibrant skin that’s ready for makeup the next day. Want to WOW them? A more intense treatment will give your skin that youthful glow with just a few extra days of downtime.

In the past, you had to choose between a procedure that offered really great results but required a lengthy recovery, or a procedure with a fast recovery but marginal results. Now with HALO you get the best of both worlds: great results with minimal downtime. HALO® combines deep dermal revitalization with epidermal renewal for a combined synergistic effect you can’t get with any other treatment. HALO® creates beautiful results without the downtime of more aggressive treatments.

HALO precisely targets years of damage to your skin, including:

What results can I expect?

HALO is a complete skin revitalization laser treatment. You will see overall improvements in your skin including a reduction in the appearance of fine lines and wrinkles, reduced pore size, improved skin reflectivity and glow, and significant removal of discoloration.

How many treatments do you need?

What happens during the treatment?

Thirty minutes to an hour before the treatment your clinician may place a topical anesthetic on your skin to reduce the sensation during the procedure. The area will be measured with motion tracking technology to ensure the area is treated evenly. Your clinician will treat each measured area by uniformly rolling the HALO handpiece over your skin until the system recognizes the treatment is complete.

With a topical anesthetic and integrated cooling technology, patients typically experience very little discomfort. Most patients describe the treatment as a feeling of heat with occasional prickling sensations, but are generally comfortable. After the treatment, most patients will continue to feel warm for an additional 15 to 30 minutes, or a bit longer with deeper treatment levels.

How soon after my treatment can I return to normal activities?

For the first 24 hours you should keep your skin protected according to Distinct Medical Aesthetics instructions, but after that you should be able to go about your normal activities. After the first 24 hours your skin will begin to peel, but you will be able to put on makeup. For a facial treatment, you will see very little change on the first day. After two to three days you will develop a light bronzing appearance. By day three or four your skin will peel, revealing your new skin beneath.

When will I see results?

You will see initial results between two and five days after your HALO treatment, but your skin will continue to improve over time. Most patients see the greatest pigmentary improvement in the first two to three weeks. This is followed by a dermal regeneration phase that continues to improve for months.

How long will my results last?

HALO results will last for years to come, but you should continue to keep your skin protected at all times using UV sunscreen to protect your new, healthy skin. Each additional HALO treatment you get will only improve the results, giving you even better looking skin.

How much does a HALO treatment cost?

Each HALO treatment is customized for your skin, and your lifestyle. Depending on your needs, your provider may recommend a single treatment, or a series of treatments. 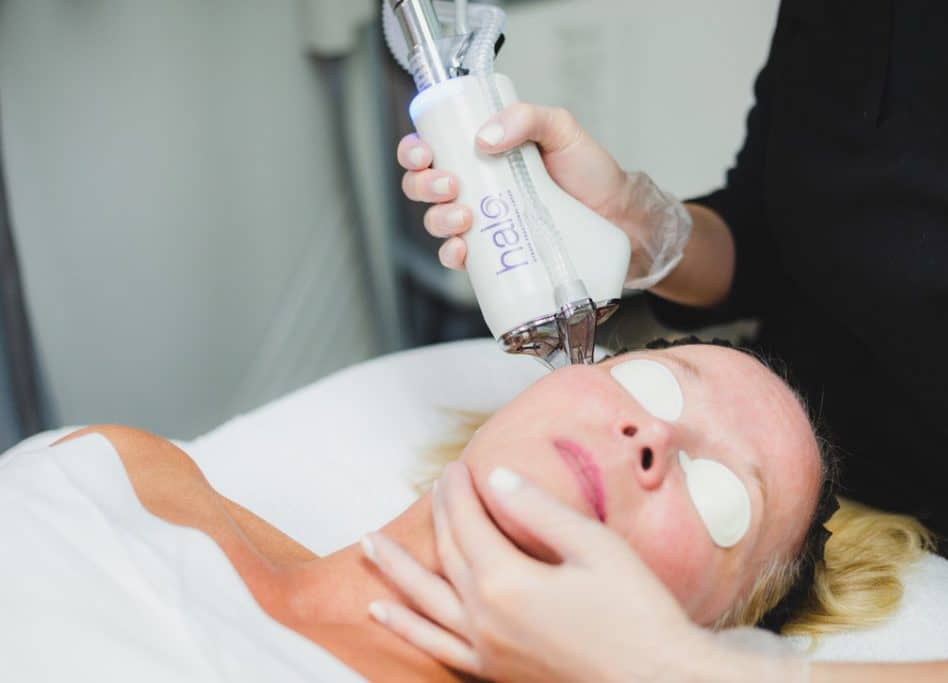 Long term sun exposure, active lifestyle and the wear and tear of everyday living results in visible signs of skin aging, including wrinkles, discoloration, scars and laxity. A fractional treatment, whether ablative or coagulative, allows the epidermis to heal quickly as long as the dermis remains intact. Ablative fractional resurfacing is a well-established treatment that vaporizes aged tissue with less thermal injury, with mild to moderate levels of morbidity and downtime. Conversely, non-ablative fractional resurfacing causes thermal injury and tissue coagulation with lower levels of morbidity. The HALO hybrid fractional laser combines ablative and non-ablative wavelengths delivered to the same microscopic treatment zone to maximize clinical results and minimize downtimes. HALO is safe and effective, while providing an enhanced patient experience.

HALO is the world’s only Hybrid Fractional Laser that delivers a non-ablative and an ablative wavelength to the same microscopic treatment zone. Combining these two wavelengths creates a strong synergistic effect, resulting in ablative results with non-ablative downtime.

NON-ABLATIVE 1470 nm
1470 nm is tunable from 200 to 700 micron penetration, the optimal depth for treating the epidermis and papillary dermis for the appearance of pigment irregularities, texture, and pore size.

HALO can treat all skin types, on face and body. Common off-face treatments include: neck, chest and hands.

What skin conditions can you treat with HALO?

What are the benefits of choosing the HALO treatment?

Distinct Medical Aesthetics is proud to serve our clients in Oakville, Burlington, Mississauga, Hamilton, Toronto and throughout the Greater Toronto Area!

FILL OUT THE FORM OR CALL US

WHAT HAPPENS IN A CONSULTATION?

01. Get to know our team.
02. Help us understand you and your goals.
03. Learn about our services and specialties.

HOW MAY WE HELP?

* All indicated fields must be completed.